Its been a loooong time since my last entry.
Still on the shrinkies but this time, moving away from the anime but still on the cartoons.
Its got to be the one and only My Little Pony: Friendship is Magic.

This is a awesome image of Pinkie Pie replicated on shrinky. 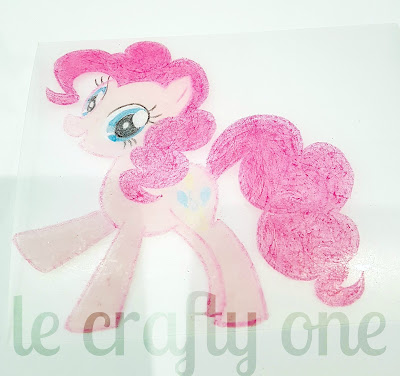 All cut out with holes punched 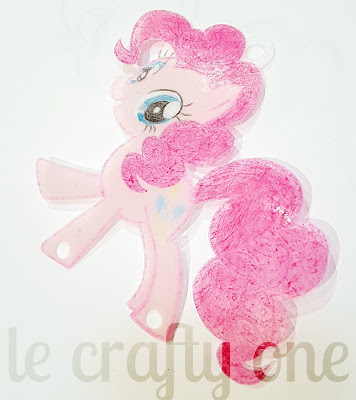 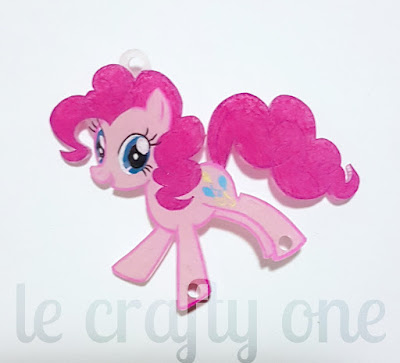 Oops! not the clearest of photos but you get the idea.

And finally here it is all lacquered and with chains on.... 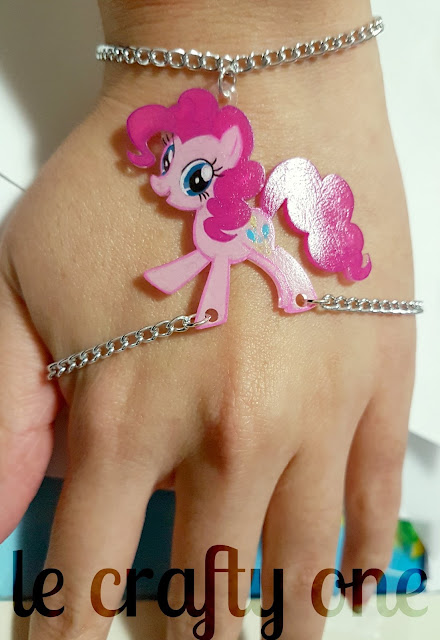 For the first few shrinkies, i has been using Derwent Artists coloured pencils. Since there was only 36, it was seriously lacking in a lot of colours. For some reasons, all the colors were on the darker side so it seriously lacked lighter tones.
So what does a crazy crafter do? Yep, buy a larger set with all the colours of the rainbow because i didn't what colours/tones i would require in the future... so just buy them all 😊

PrismaColor offered the largest set with the widest range of tones. So i got the 150 piece Premier. 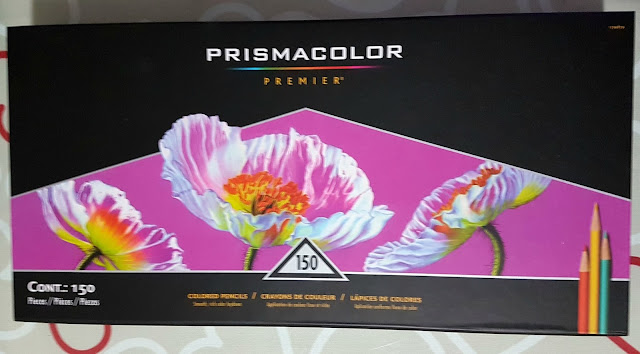 Comparison to Derwent
At first glance, the sheer amount of colours was amazing and the pencils look like any other pencil (im not really a pencil aficionado). Looks fine.
But on closer inspection, the pencils are of poorer quality when compared to my old Derwents (probably a big price difference between the two, but the Derwents are from way back).


The imprint alone along the length of the pencil is poorer on the PrismaColor. The stamping is uneven. The Derwent stamping is very even, aligned and complete. 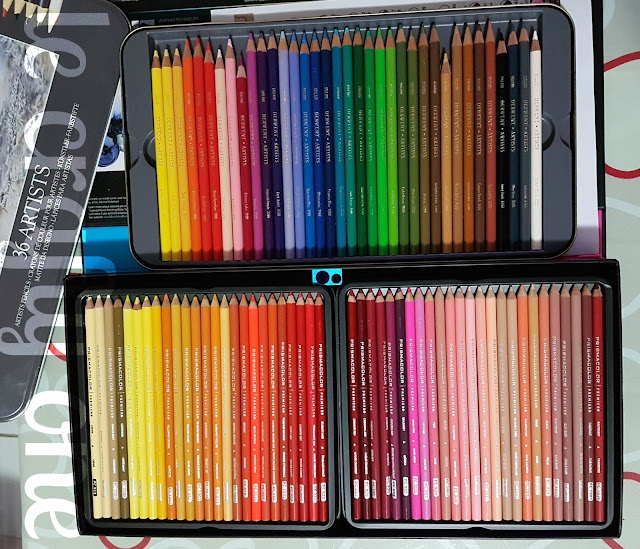 Picking up the Prisma, the pencils are thinner and the colour core is proportionally less than the Derwent. Less pencil for less money.
A thicker barrel is easier to grip when in use. 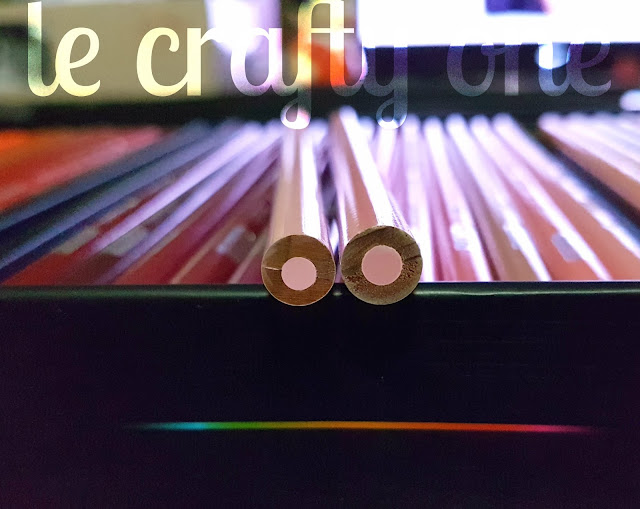 Worst of all, it appears that the PrismaColors are manufactured with poor quality wood as there were several pencils that were split/cracked along the length of the pencil... 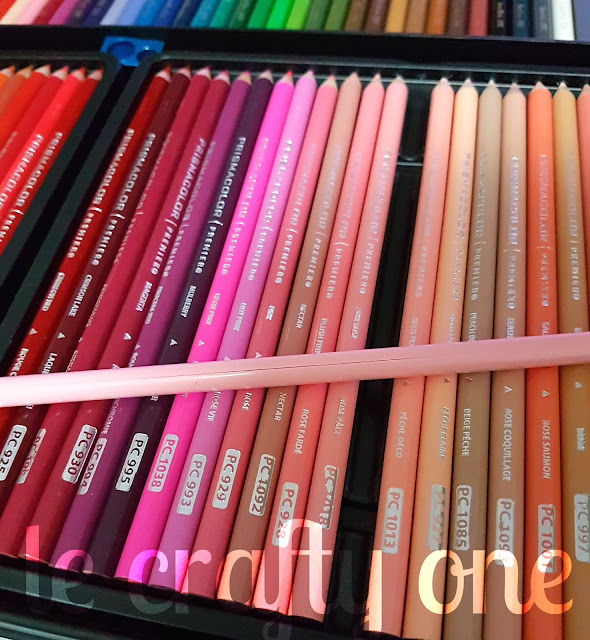 Even with the crappiness of the quality, the only saving grace for the PrismaColor Premier is the softer coloured core (apart from the awesome colour spectrum they produce). The colour draws out smoother and more pigmented (a side effect though is the excess "colour dust" that could easily smudge across your work if not careful) than the harder waxy Derwents.

In contrast to Derwent on plastic, the drawn/coloured side actually looks much better and best used as the "top" or "right" side. the coverage is so great, its almost as though the image has been printed or painted on.

Viola!
This is the drawn side as the top side with a clear coat. 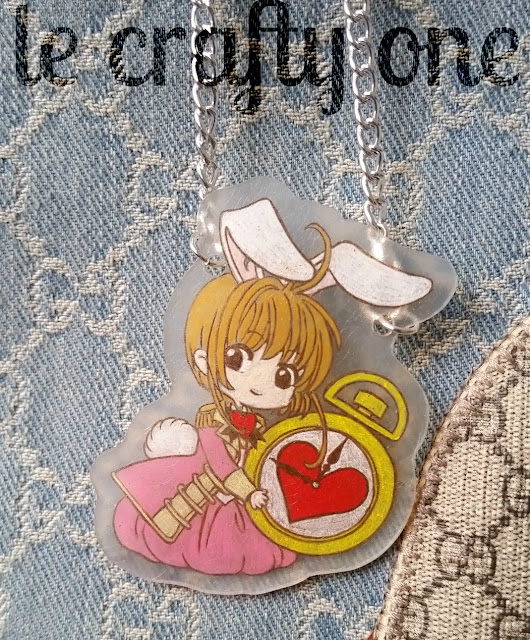 Verdict is as crappy as PrismaColour quality is, its like a match made in heaven for shrink plastic.

The original plan was to make a shrinkie something with My Little Pony... but due to the limited colours of my current Derwent artists coloured pencils set, i went back to a Sailor Moon image again.

As cute as the Sailor Moon pictures are, they are a bit more fiddly to draw and colour compared to the simple lines of Ponies.
I'll just have to get some more pencils first! 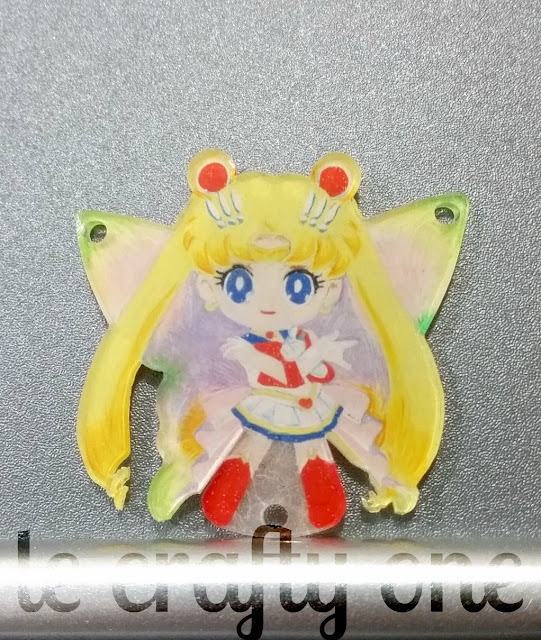 This side is what i call the glossy side. 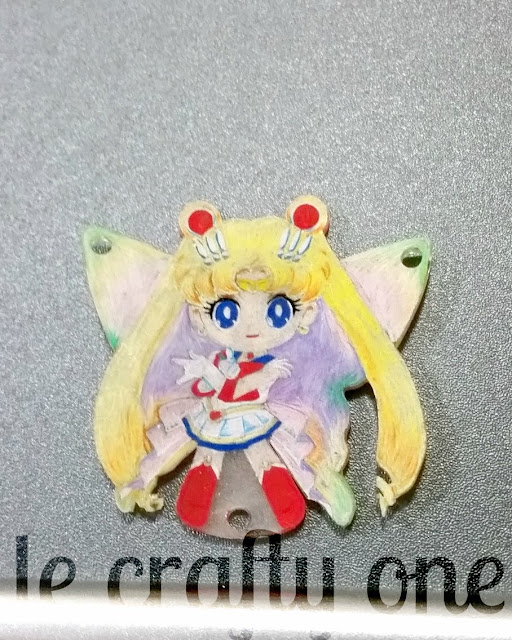 This is the coloured/marked side.
Maybe its the colours used in this picture, but she does look a lot more "waxy" than Sailor V. 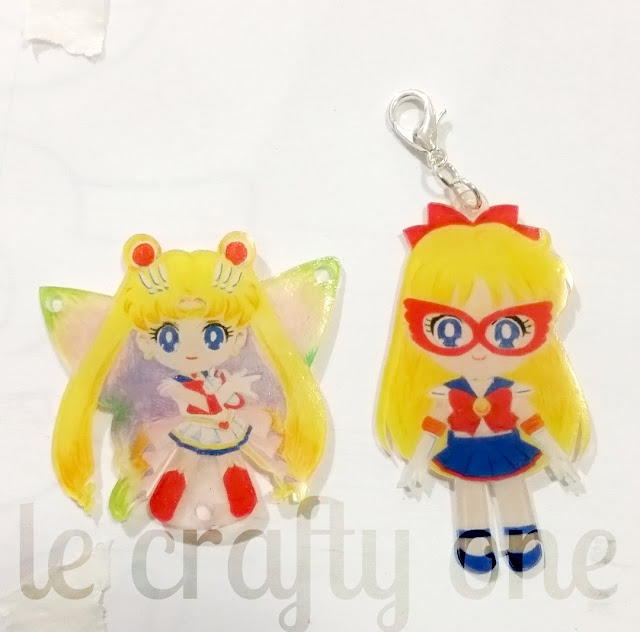 This is the idea for the 3 holes punched into the shrinkie.
What do you call these? Hand chain? The craft chain i use is too thick and bold and overpowers the whole thing. I will need to swap these out when i get some thinner, dainty chain. 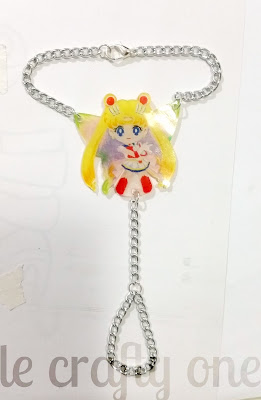 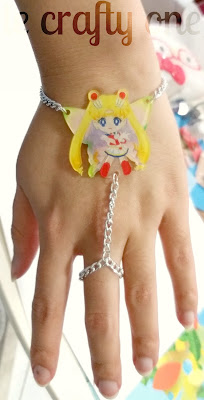 The advantage of using markers on shrink plastic is clean lines and even coverage... however it all comes unstuck when you need to get white on the frosty clear sheet of plastic. There just isn't any white ink marker.. sure you can get white paint marker but it probably won't shrink well.

This where colour pencils are required.
Based on the limited colour set i have, Sailor moon characters would work great - most vibrant solid colours. Getting even coverage with wax based pencils is alot harder than markers.

How freaking cute are the Sailor moon images on Sailor moon drops game.
Sailor V has to be the most adorbs. 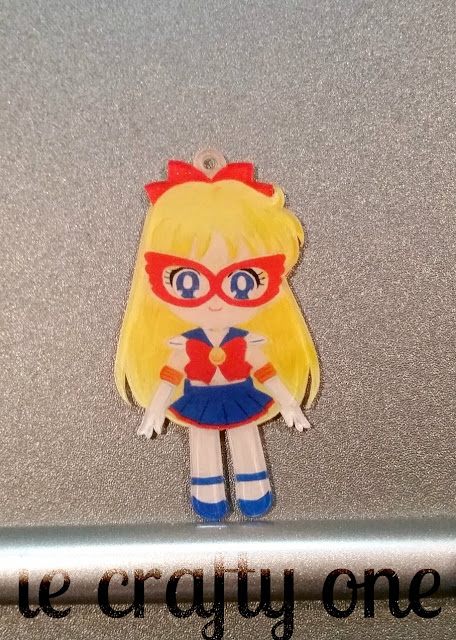 By now, i'm also guessing that the "marked" side is the "right side up" (on the thinking that if you drew on opaque coloured shrinkie, the drawn side could only be the top side) but with the clear shrinkie, i prefer the drawn side as the "underside" and the thick clear side as the top for a glossy finish. 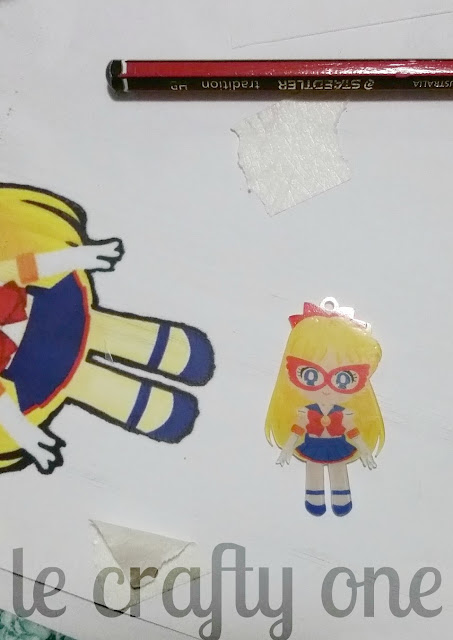 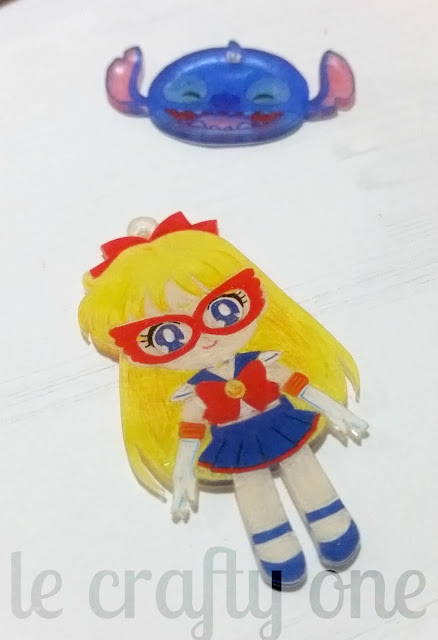 This is the drawn side which is the underside for me. You can see the texture of the coloured pencils is rougher than the drawn side of Stitch which was drawn with markers. Markers also keep the translucency of the shrinkie sheet whereas pencils give an opaque finish.

She turned out really well 😄(even though coverage is not 100% - shortcoming of using pencils).
Now to decide what to do with her...

Back on the crafting bandwagon!

Having finally hauled my butt onto eBay to buy some shrink plastic ... or shrinky dinks or shrinkles ... whatever the companies want to call them.
Sad as it is, i couldn't find shrinkies in store in Sydders (the only ones that i could find were those children's craft packs that had pre-printed images on them 😕).

But anyways, yay that the plain shrinkies arrived just before the Easter break so of course, i got stuck right into it over the break.

My test piece - to see how much it actually shrunk 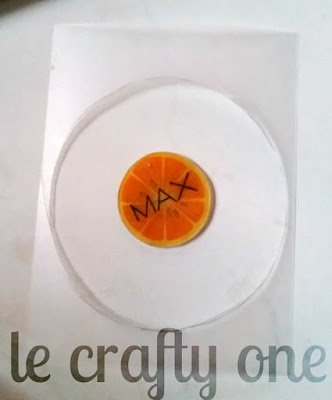 Even though the package said the plastic will shrink 7 times smaller ... that was a bit of a lie - as you can see its more like 30% shrink.. although really, that's fine with me but the blurb was misleading.

The initial test was done with coloured pencils.
I already tried using permanent/indelible markers to see how that turns out.
The finish between the 2 are very different. The pencils makes the shrinkie opaque, whereas the markers resulted in translucent finish (the shrinkie sheet is frosted).

Well with the initial test out of the way, onto something bigger!

With some sharpies and a custom design. 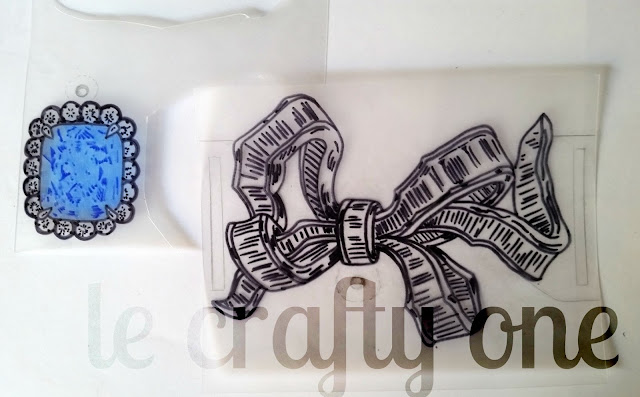 Cutting the holes inside the bow and the slits on the either side of the bow with a knife is freaking hard!
It is very easy for the knife to slip a bit and its all over red rover 😢

Annnndddddd... you have to be very careful removing the shrinkie from the over while its still hot as its still soft and malleable. Very easy for the slit to no longer be a slit .. if you get what i mean. 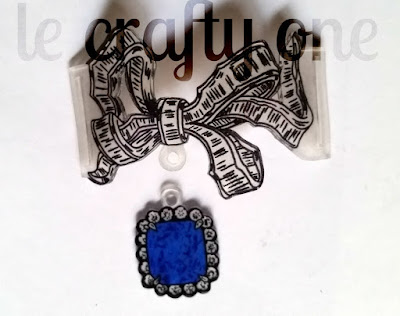 The marker colours darken to what it would look like on paper.. 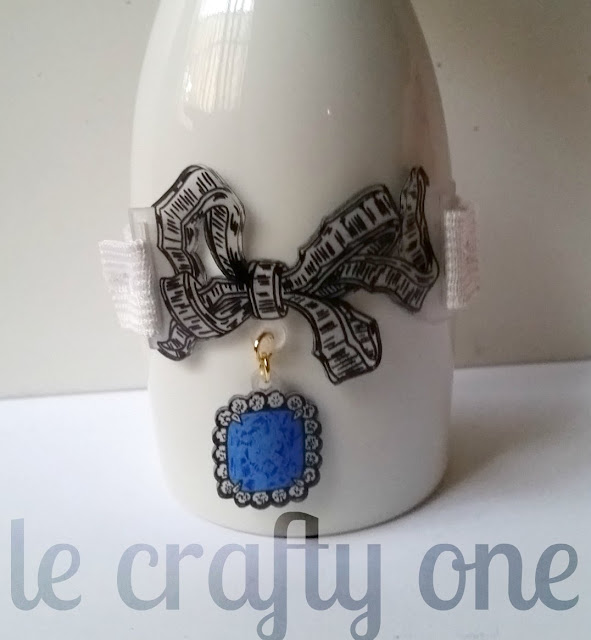 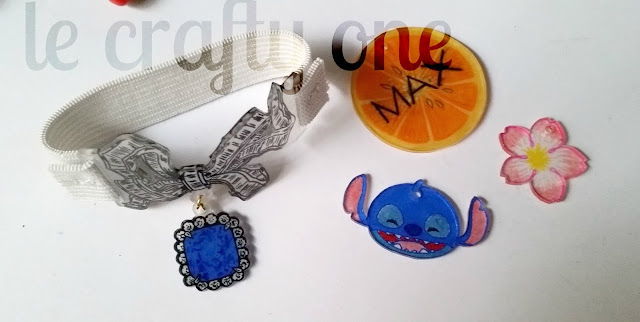 how cute is stitch!

Its been a long while since crafting anything *sigh* so its been crickets and tumbleweeds.
Will need to get myself back on the bandwagon.

However, before then, i really would like to share my unboxing of new GUCCI animalier feline head earrings because it was so "packaged" (a lot like sealed food which was interesting) compared to what you would normally get with these designer costume accessories.

Yep, other than making stuff, i like to indulge in some designer stuff. I do not condone it :P

Gucci's new stuff is very whimsical, full on and not for the faint of heart! But certain pieces are totally awesome! 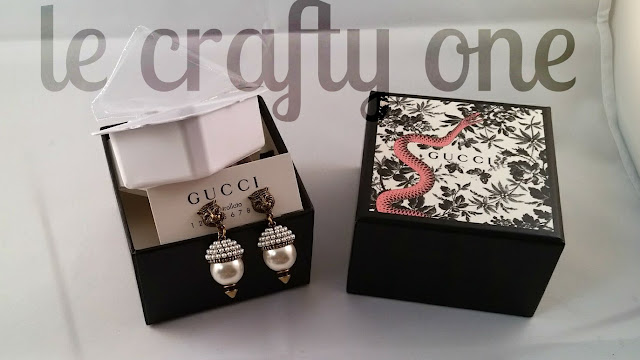 We all know how cuuuuuuute Disney's japanese Tsum Tsum range is!
So i totally had to revisit the totally kawaii Tsum Tsum greeting card book - which i had previously used for Alice and White Rabbit playing card... and actually use it following the way the patterns were originally intended =)
But of course, i couldn't possibly just copy a greeting card exactly as it is prescribed in the samples - where is the fun in that!
The fun is working out how to do things within your limitations naturally LOL
Having left this until the last minute for a cute little bub's birthday, i could only get my hands on a limited selection of coloured cards to slice and dice.

i chose individual characters that "go together" somewhat and what i could make do with the colours i had - a Mickey, Donald & Pluto stacker.
I would have really loved to do a Lilo & Stitch but the colours didn't extend that far. 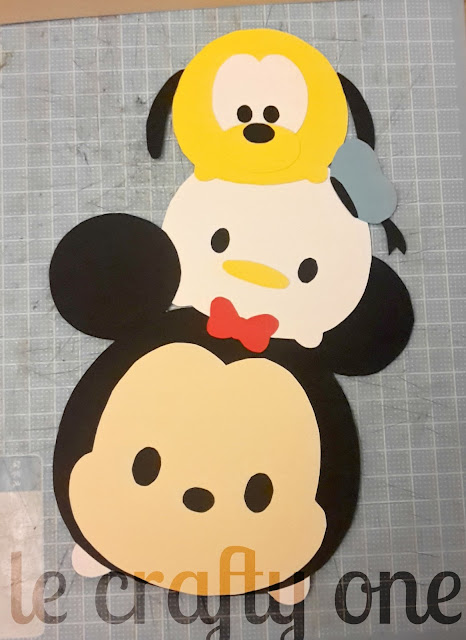 Turned out pretty cute with the slight misalignment of the stacking.
The "card" part is just Mickey's head. 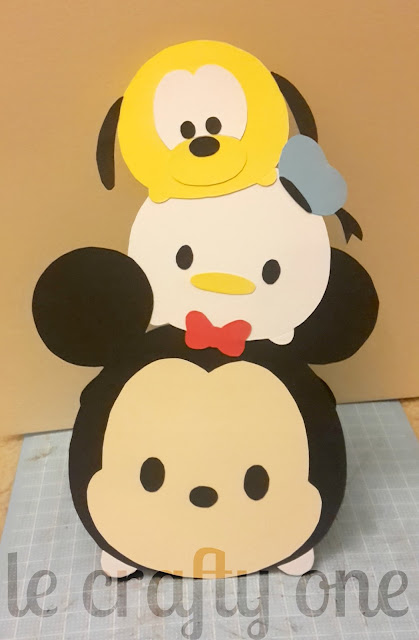 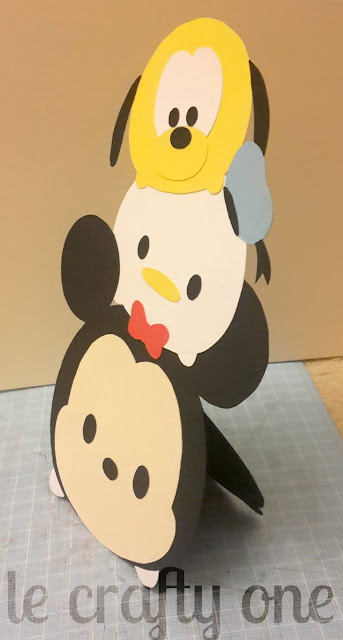 This took about 2.5 hours (omg!) and can most probably be much quicker if i started with a knife that was actually sharp!
And it's not a good idea to use a chunky, fat box cutter even if its sharp. Small hands (well, not that small) and a chunky tool do not mix. Hand was not very happy after using that.
Pick a good slim Stanley knife or slender box cutter/retractable knife and the world will be your Tsum Tsum filled oyster.

Very cute and turned out awesome if i do say so myself.
Totally going to make more cut out tsum tsums just for the hell of it =D
Posted by Jen at 11:59 PM No comments:

Jen
Hailing from the totally uncrafty city of Sydney, i just wanted to share my crafting adventures and my love of designer shoes!